Memry Corporation is a global market and technology leader in Nitinol components. We provide Nitinol melting and materials, a complete range of Nitinol fabrication and finishing, and engineer-to-engineer support in both prototyping and production phases. With melt to market® capabilities under one company roof, medical device customers benefit from precise control, predictability, transparency, a streamlined production process and a platform for collaborative innovation.

Shape setting is used to form a Nitinol wire, tube, strip or sheet into components with specific geometries.
Read More

Due to its titanium oxide surface, Nitinol is a tough, abrasive material, making carbide tooling a best practice.
Read More

Surface finishing is essential in the manufacturing of Medical devices, especially in long-term implants as it is proven method to ensure sufficient corrosion resistance and fatigue life.
Read More

Memry offers many options for joining Nitinol to itself or other materials, including joining wires of different diameters, and joining Nitinol wire and tube within device components.
Read More

Memry has extensive expertise and capabilities with respect to testing and characterization of Nitinol materials and components.
Read More

Memry specializes in the fabrication of micro-coils for various medical applications, sold both as raw materials and as part of higher level assemblies per customer requirements (e.g. spring coil guidewires).
Read More

Memry is a world leader in medical and industrial applications requiring Nitinol alloys and complex manufacturing processes. With decades of steadily increasing competency in Nitinol metallurgy, we are the ideal partner for developing advanced materials and components.
Read More
Read Less
Medical markets
Thanks to its extraordinary properties, Nitinol has opened significant markets in a growing list of medical applications, including widely used implantable and one-time use medical devices. Nitinol's unusual ability to accommodate large strains, combined with its compatibility with the human body, have made it one of the most commonly used materials in medical device design.

Nitinol and other advanced alloys are used in a wide variety industries, including aerospace, automotive, and defense., Many of these applications involve actuation via the thermal shape memory effect of the material.

Memry’s major industrial markets & applications
Our parent company, SAES Group, is a world leading supplier and manufacturer of Shape Memory actuators used in many industrial applications. They offer a highly diversified product portfolio of trained wires, springs and components that are used to satisfy the most unique applications.

Memry has seen an increase in new techniques and devices that have opened up the use of Nitinol in both implantable and single use cardiovascular devices.
Read More

Devices that Memry Corp manufactures in the Ophthalmology market offer a combination of flexibility, consistency, size and graspability.
Read More

Memry Corp develops Nitinol alloys that have greater strength and a lower modulus of elasticity that make it useful in orthodontics wires and brackets.
Read More

By offering both raw materials and finished devices, Memry is able to provide a complete solution for customers within the Urology/Endoscopy market.
Read More

Sports Medicine industry is well suited to use Nitinol as the Mechanical properties make it ideal for use in many orthopedic medical devices, including Trauma accessories.
Read More

Nitinol and other advanced alloys are used in key components in the aerospace and automotive industries, particularly where thermal shape memory material enables actuators.
Read More

Memry is a world leader in medical and industrial applications requiring Nitinol alloys and complex manufacturing processes. With decades of steadily increasing competency in Nitinol metallurgy, we are the ideal partner for developing advanced Mill Products and Semi-finished Raw Materials.

Memry has been drawing tube since 1992. We can quickly deliver Nitinol tube with a variety of finishes and in a wide range of sizes.
Read More

Memry has an unparalleled history and scale in the Nitinol industry, starting in 1966 as the first commercial supplier of Nitinol to the Naval Ordinance Lab, which is where the “NOL” in NiTiNOL originated. The VIM + VAR nitinol melting process was established in 1990 through extensive superalloy experience to provide premium, repeatable quality by combining the advantages of VIM (homogeneity) and VAR (structure). This mature process continues today, outputting several hundred thousand pounds of clean, consistent material every year. Binary alloy formulations as well as ternary, quaternary and beyond are melted via this process, tailored to the users specific needs in heat sizes from 30 to 4000 pounds.

We melt and produce Nitinol alloys in all common binary and ternary formulations. Custom formulations in binary, ternary, quaternary and beyond can be produced upon request. The table below depicts the most common Nitinol alloys:

The size and distribution of these inclusions play a critical role for device designers who work with Nitinol.  The size and area fraction of inclusions are precisely sampled and measured as detailed here. This is an important consideration for medical and industrial high fatigue applications, but also for miniaturized products where inclusion size must be contained due to extremely fine structures.

While SAES standard purity Nitinol is suitable for most Nitinol devices, SAES offers two cleaner options in response to our customers’ needs for higher performance applications.

Redox is a second-generation material based on our standard Nitinol melting practice but carefully modified and controlled to limit oxide inclusion formation. Redox has been relied on by customers for over a decade.

The table below shows comparative features of Standard, Redox and Enduro materials: 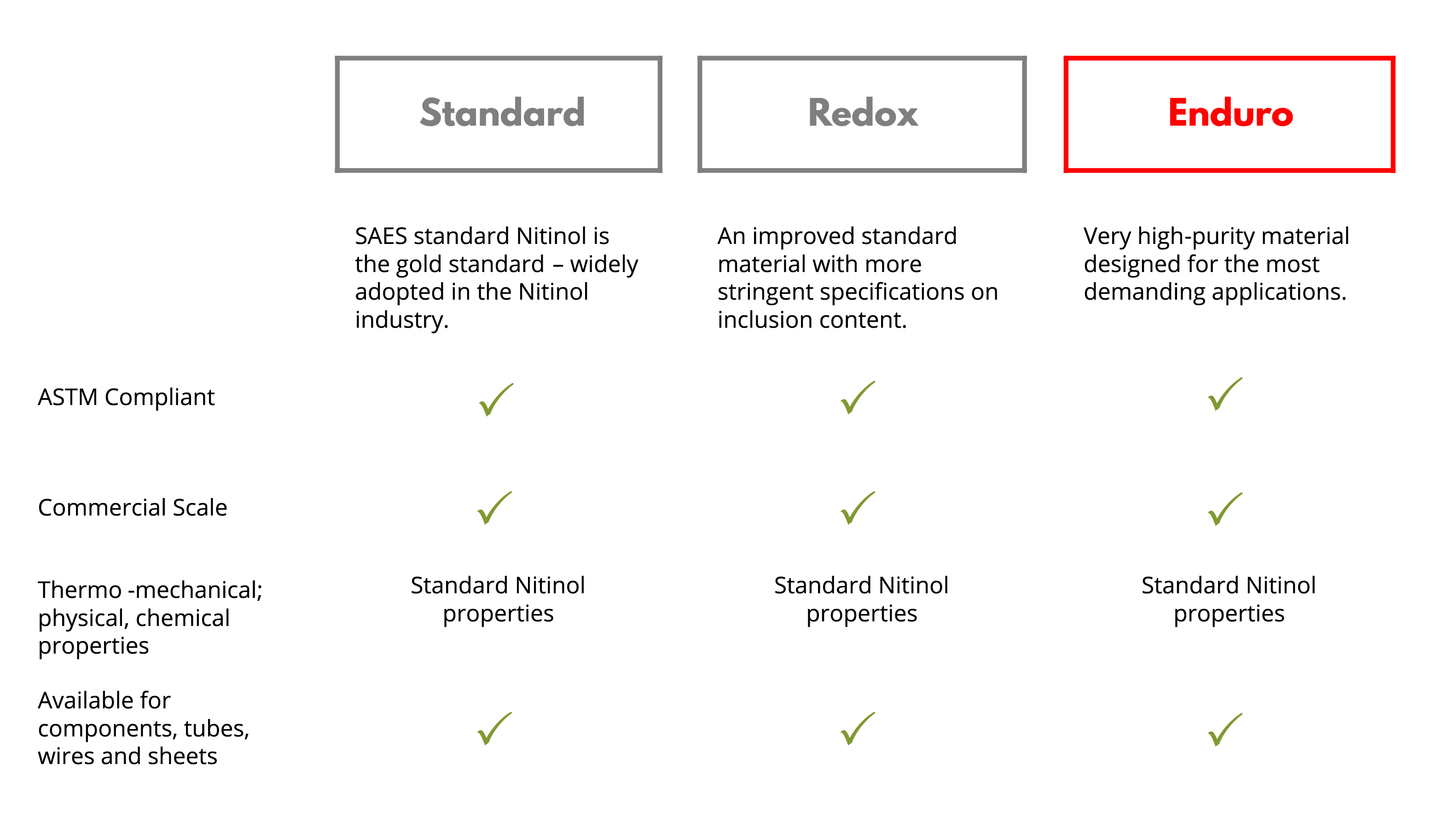 The histogram below demonstrates the differences between Standard and Enduro inclusions - showing a dramatic decrease in relatively large inclusions, leading to significantly improved fatigue life:

Over years as a leader in Nitinol materials and component manufacturing our team at Memry has accumulated vast knowledge in Nitinol metallurgy and the engineering-know-how required to bring a conceptual design from initial melt to market.
Read More

A comprehensive guide to Nitinol is available for download. This document provides the information required for a solid technical understanding of concepts ranging from metallurgy and the effects on physical properties to ideal component manufacturing technologies and common quality control testing methods.
Read More

Memry Corporation is a global market and technology leader in Nitinol. We provide Nitinol melting, complex components and materials, a complete range of Nitinol fabrication and finishing, and engineer-to-engineer support in both prototyping and production phases. With melt to market® capabilities under one company roof, medical device customers benefit from precise control, predictability, transparency, a streamlined and convenient production process, and a platform for collaborative innovation with a rich 70 year history.

We use cookies on this site to enhance your user experience

By viewing any page you are giving your consent for us to set cookies.
OK, I agreeNo, give me more info